Interview, One of a Pair, and an update

It’s been a busy week here in my writing world. 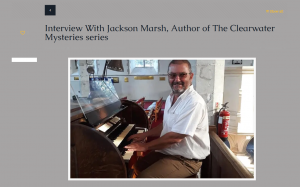 Firstly, I was interviewed by Alan Wild for his excellent website that features interviews with writers of gay fiction. This interview gives you some personal background about me, includes some photos of where I live, and starts with a photo of me playing a church organ. If you’ve read my standalone YA romantic mystery, ‘The Blake Inheritance’, you will know that I have a particular interest in church organs. The photo was taken a couple of years ago when I returned to my hometown of New Romney, on the Romney Marshes, UK, and was lucky enough to be invited to play for a service I happened up. It was a bit nerve-wracking as I’d not played for years, but the nice thing was that this was the same instrument I learnt to play on over 40 years previously.

Here’s the link to the Interview with Jackson Marsh 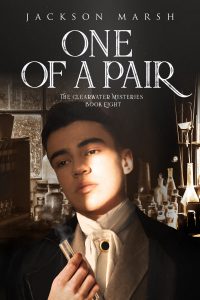 Secondly, the eighth book in the clearwater Mystery series was published yesterday. There is a more detailed post about this novel further down my blog, but, in brief: ‘One of a Pair’ continues the story of Jasper and Billy, sees James Wright deal with his first case as the lead investigator of the agency, and brings in the eccentric Dr Markland to play an important role. You may remember Markland from ‘Deviant Desire’ and later, ‘Unspeakable Acts’ where he fell in love with a certain young lady who turned out to be… Ah, no spoilers allowed, sorry.

While all that has been going on, I have been writing the prequel to the Clearwater Mystery series, and I’ve titled it ‘Banyak & Fecks.’

Those of you who’ve read the series will know who those two are, but what you won’t know, are the details of how they came to meet in London in 1844, and what they were doing between 1844 and October 1888 when ‘Deviant Desire’ starts. Actually, Fecker’s story begins even earlier, in 1881 in Ukraine when he was 13 (or 15, as no-one really knows his exact age). I’m enjoying the research for this one and have been reading about all kinds of things; the history of Ukraine, circuses in the 1800s, ships, the East End slums, language, Victorian rent boys and prostitution, and several other side matters too. No promises on a release date for this one, but I am aiming for the end of this year. I’ll tell you now, it’s not the same as the others, it’s not even a mystery, but it is a story of an unlikely but more or less instant friendship, and how two young men survived the East End streets in the 1800s. 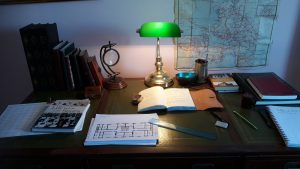 My writing desk where I research and make notes. The open book is my leather-bound Clearwater ‘bible’, the floor plan is Clearwater House, and the map on the wall is the GWR rail routes circa 1890.

Chugging along in the background is my idea for, one day, producing a Clearwater Companion, a book of information, details, maybe illustrations if I can afford an artist, and other snippets for anyone who might be interested. This is an ongoing project and one that will take a long time to compete. I don’t know yet when the series will end. It may never do as I am enjoying writing it so much, but now and then, when I am not working, I jot down notes in my ‘Companion’ folder for use later. So far, I’ve only written an outline of Archer, Lord Clearwater, but I thought I would share with you what I have.

Remember, these are only notes.

Major life events
1868    Attended Millfield Preparatory School
1872    Britannia Royal Naval College, Dartmouth
1874    Midshipmen
1876    Sub-lieutenant, Royal Naval College, Greenwich
1877    Lieutenant aboard HMS Britannia
1886    Honourable discharge after an injury during the Odessa skirmishes. Elevated to ‘The Honourable’ on the incarceration of his elder brother
1888    July. Elevated to the 19th Viscount Clearwater on the death of his father

We learn his full title in ‘Fallen Splendour’ when he is called into court to testify.

This is the Shutterstock model who represents Archer on the cover of ‘Deviant Desire.’ The image was bought under license.

Titles
A Viscount is the fourth rank of the British peerage system, coming beneath an Earl but above a Baron. The Clearwater of the title is derived from family land owned in the north of the country. Riverside is the family’s London Borough, and Larkspur, their country seat on Bodmin Moor.

Lord Baradan of Hapsburg-Bran. This is a made-up title, intended to show Archer’s European heritage. The Hapsburg (also spelt Habsburg) was one of the principal sovereign dynasties of Europe from the 15th to the 20th century. Hyphenating it with Bran, in what is now Romania, I wanted to make a link with Transylvania. Bran Castle, near Brasov, is known as ‘Dracula’s Castle’, though it has little or nothing to do with Vlad Tepes, Bram Stoker or his novel.

Honorary Boyar Musat-Râșnov. A boyar was a member of the highest rank of the feudal Bulgarian, Russian, Serbian, Wallachian, Moldavian, and later Romanian and Baltic states aristocracies, second only to the ruling princes from the 10th century to the 17th century. Again, I wanted Archer’s roots to run deep in European history in case that would be of use later in the series. Because the title ‘Boyar’ fell out of use in the 17th century, I made him an ‘honorary.’ Rasnov is a place between Bran and Brasov (all of which I have visited). These are all inherited titles, passed down from father to son over the centuries.

Archer and Camoys
Archer’s father (Mathias) was obsessed with the battle of Agincourt (25th October 1415). He named his eldest son Crispin, because he was born on the anniversary of the battle which is also St Crispin’s Day. I had in mind Shakespeare’s Henry V, and in particular, the lines, “… we band of brothers; for he today that sheds his blood with me shall be my brother.” In the series, Crispin tried to kill Archer and therefore shed his brother’s blood, but as Archer builds his ‘crew’ of friends, we come to see them as a band of brothers.

Archer was named after the archers who won the battle of Agincourt, and Thomas de Camoys was the English peer who commanded the left wing of the English army at the battle. It is not a name Archer uses very often!

From my notebook
My notes on Archer include the following jottings.
Philanthropist, youngest member of the House of Lords at 29 (1888)
Brown eyes, stubble by evening, fit, prominent cheekbones. Toned. (Big and hairy ‘down there’.)
Doesn’t believe in class distinctions. Didn’t like his father. Gay, modern, forward-thinking.
5′ 10″, pouting lips, dark lashes.
Last time at the servants’ hall table on 13th birthday.
(Father ailing, Crispin mad, Archer to succeed, recovering from Odessa skirmish of 1886. Father, Mathias, 51, hunting accident (?) Father: 1837 to 1888)
‘Geroy’ by Fecks (honourable)

Have a good week and I will be back next Saturday. Remember, you can always post comments about the blog on my Facebook page, and if you go there, please do give a like and share.

This is a photo of us celebrating our three-year wedding anniversary, 18 years since arriving on Symi, and Neil’s birthday which all happened on the same day, September 8th. Neil’s the one pulling a funny face and wearing a top hat; he’s far more into SteamPunk than I am.

This site uses Akismet to reduce spam. Learn how your comment data is processed.

Find out more or adjust your settings.

This website uses cookies so that we can provide you with the best user experience possible. Cookie information is stored in your browser and performs functions such as recognising you when you return to our website and helping our team to understand which sections of the website you find most interesting and useful.

Strictly Necessary Cookie should be enabled at all times so that we can save your preferences for cookie settings.

If you disable this cookie, we will not be able to save your preferences. This means that every time you visit this website you will need to enable or disable cookies again.